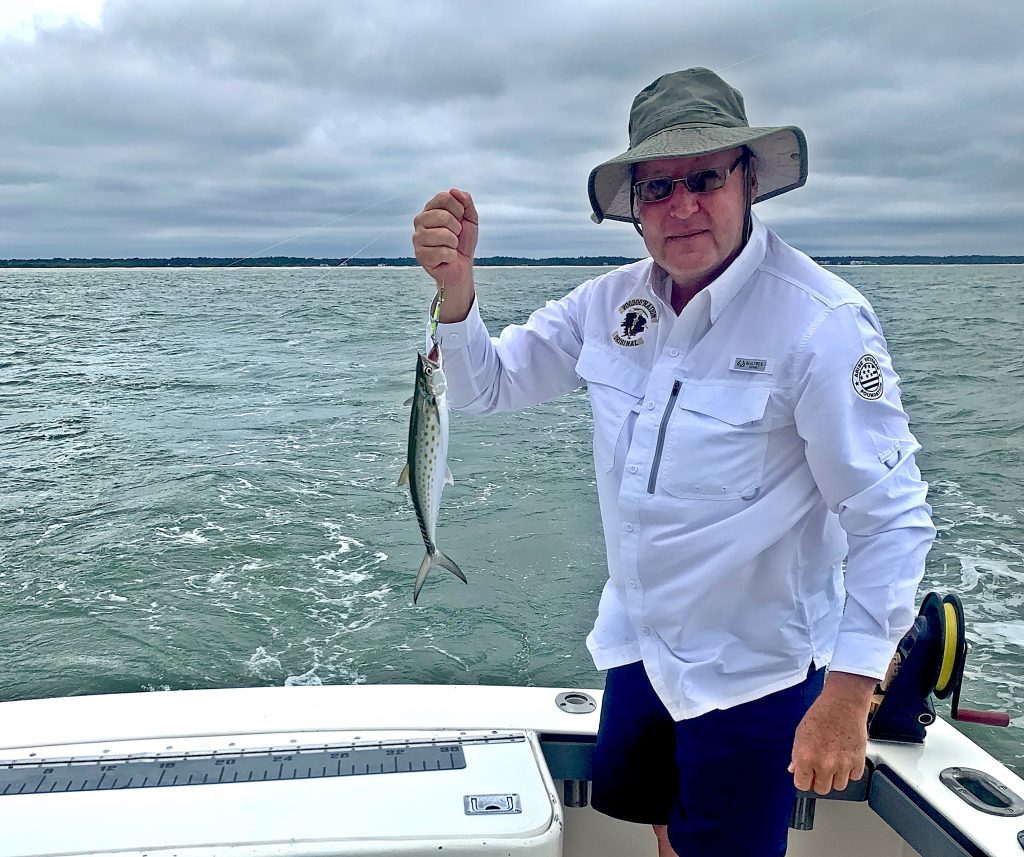 In September of 2020, Arise Veteran Foundation (Arise) partnered with Hunters Helping Heroes and their ole buddy VooDoo to take some of our nation’s heroes on a “Deep Sea Hunt.” As all you know, our nation has faced tremendous adversary over the last several months and our inaugural “Deep Sea Hunt” faced its own hurdles. The trip was originally scheduled to take place in the gorgeous waters of Hawaii. However, due to the current conditions, the veterans were forced to redirect their attention to another location and since several of the veterans has spent time in Carolinas, the Outer Banks was the unanimous choice for this amazing trip.

Dr. Kendall Brune (Arise) and Ryan Miller (Hunters Helping Heroes) have both committed time and energy to serving the men and women who serve us in our armed forces. This trip was to be no different. Arise provided the travel for the trip while Hunters Helping Heroes provided the lodging for the trip. Combined the offer was hassle free for our heroes to participate. This level of support allowed a hassle free trip for our heroes. This was a unique trip; the spouses were invited to participate with their respective hero.  What an amazing opportunity to say thank you not only to our veterans but those who supported their efforts.

Our Heroes for this trip were 3 veterans from Oklahoma, a Vietnam era veteran and two Desert Storm era veterans:

David Thomas was unable to attend with his wife due to a last minute loss a close family member.

Major (Retired) John Harkins enlisted in the United States Army in 1990 as an infantryman. He was commissioned as an infantry officer in 1996. During his twenty-one year career, he served in CONUS and OCONUS assignments in both conventional and special operations units. He has 18 operational deployments which include multiple combat and peace-keeping missions. Major Harkins is a graduate of the United States Army Command and General Staff College and also holds a Master of Education degree in Organizational Leadership from Vanderbilt University. He holds a Bachelor of Arts degree in psychology from the University of Central Oklahoma.

Major Harkins has received numerous military awards and decorations to include several foreign military honors and awards. His military training includes several Army and inter-agency schools and courses. Major (Ret) Harkins and his wife, Kenna, reside in Oklahoma.  They have 3 children.  He is a proud member of the Muscogee (Creek) Nation.

Upon departing sunny Oklahoma these men and their entourage made their way to Carolina Beach, NC. A long day was rewarded with a fresh seafood dinner for all at one of the local establishments in Carolina Beach. Tuesday, the official day #1 for fishing was stalled due to a “Small Craft” advisory being issued for the area. Wednesday, day #2 was riddled with heavy rains further delaying the castoff for a deep sea hunt. This day saw the men touring the local area looking for history and as luck would have it, our group stumbled across a “Sling Load” practice session at Fort Fisher in Kure Beach, NC. It took our heroes back to their active duty days. Next the group traveled a few miles to the south and toured the facility at Fort Fisher State Historical museum. This is the site of the largest land-sea battle of the Civil War.

Thursday, day #3 saw increased rain and high winds due the hurricane remnants passing through the state and again our trip was postponed. This day, the group ventured out to the Battleship North Carolina which is moored in Wilmington, NC. The tour of this amazing testament to American ingenuity and resolve was inspiring. The minute you step foot on the gangplank to board the ship, you are transported to a different time. This was an amazing tour enjoyed by all.

Friday, day #4 daybreak brought calm seas and sunshine to the delight of all involved. The deep sea hunt was on…finally our heroes go to board the fishing boat.  The boat, Hot Ticket, was an incredible vessel and provided everyone with a comfortable trip even in the slightly windy conditions. The vessel was large enough to handle the seas and the captain and first mate were amazing hosts for this event.

The trip started later than usual and all hands were on deck and ready to roll. The seat belonged to Major Harkins first and it wasn’t long before the hook was set. Spanish mackerel were the target for the day as the weather window was only 4 hours long before we were expected to have rough seas again. Next up was Sgt. Riley and it only took about 3 minutes for him to hook his first mackerel. The action was non-stop for 3 hours. The wind began to pick up after about two hours at sea and the conversation turned to excited laughter has the crew began to experience rougher water. The last line was pulled to the boat at 2:30 pm and the final tally was 42 hooked and 26 landed in a little under 3 hours. Great experience.

The trip was not over, the boat ride back to the dock would prove to be full rocking and rolling waves with the 39’ boat being bounced around just enough to give the crew a real dose of sea fishing. The boat had to navigate the return trip over a sand bar that was only 5’ deep but this is where the sea got really rough for about a mile. This portion of the ride produced plenty of laughter and hollering as it reminded one of a good roller coaster ride.

The evening ended with VooDoo preparing the day’s catch for all to enjoy. The meal was complete with Cajun seasoning, butter and the exact amount of time on the fire. The fish was paired with fresh vegetables and just enough seasoning to match the Cajun heat on the fish.   What a meal; we shared with our neighbors to the north who were also retired military. Lots of amazing stories, good company and long lasting memories marked this trip to the Outer Banks. I believe the bar is set for the following years to match the quality of this inaugural Deep Sea Hunt.

Arise and HHH are planning two trips in 2021; the two locations are Costa Rica and Hawaii. Stay tuned for VooDoo to update our heroes on upcoming trips. If you are interested in participating in these trips, please email ole VooDoo at voodoonationcentral@gmail.com